To be feminist has always meant to be a gender abolitionist 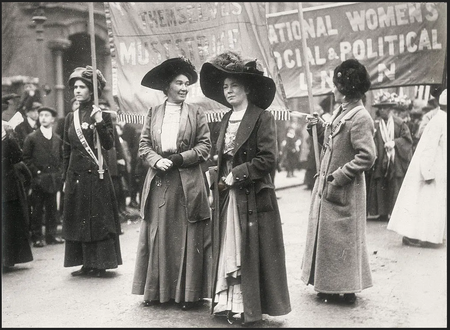 When a friend and ally sent me a link to this piece by Victoria Smith published in the Critic, I was in the midst of some other project and in no mood for the interruption required to read even this short piece.  Nonetheless, I read the headline, opened the link in my browser (so it too could join the heard, waiting for me to give it the time to read while it sucked my machine dry of its RAM, accelerating the next reboot) and quickly returned to the task at hand after acknowledged her message, replying: "Damn straight. I always thought that was the whole point of feminism, to take a critical view of the gendered sex-role stereotypes imposed upon us."

I just spent the ten minutes required to read this though. Feminism has always been gender critical: Historical feminists knew better than anyone that biological sex is real is worth at least ten minutes of your time as well.  If you have ever been frustrated by the poseurs claiming their 'intersectional feminist' credentials to defend the empowering experience available to young women who dance on a pole for the male gaze, or defend the feelings of men claiming to be women hurt by the fact that women might assert their privacy and dignity as trumping the narcissism of those men, you will particularly enjoy this piece.

The problem with rebranding feminism “gender critical feminism” — much like rebranding women “cis women” — is that it turns our most essential social and political concepts into mere subcategories of broader, looser concepts defined by others. Moreover, such a rebranding repositions feminism as a response to trans activism, denying the longstanding nature of feminism’s rejection of gender. It denies us our legacy, making it that much easier for outsiders to claim women such as Allison Bailey and Mary Wollstonecraft have nothing in common. This is just not true.

To be gender critical IS to be feminist, or at least pro-feminist for those of us otherwise not qualified.  When we call ourselves Gender Critical Greens, we are in effect calling ourselves Feminist Greens.  Not so many years ago, at least in the United States, this too would have been considered redundant.  In the current climate, with the organization we spent decades building having been captured by men's rights activists supported by an industrial lobby for gender ideology, it has become an important distinction.

Unlike Greens around the world, who rally around the Four Pillar Values, in this country, our founders from that 1984 meeting in the Twin Cities laid out Ten Key Values around which to unify.  The early negotiations on this document articulated it as Post-Patriarchal Values.  At the 1992 Annual Congress of the Greens / Green Party (usa), a three-quarter majority of the body were agreed to rewrite that as simply Feminism.  It was a heady day, indeed. I had spent most of a week in Minneapolis campaigning in support of this initiative by the Women's Caucus, organizing with others as a pop-up caucus we called Men Evolving Nonviolently (providing us with a clever recursive acronym for our invitations).  As I would later explain the action, once back home in Georgia, when knocking a door or working a crowd, we took this action so people would know what we meant, so we did not have to get lost explaining what post-patriarchal meant.  It gave us a body of literature to fall back on, their authors to look to for leadership and inspiration, so we might better understand both the shoulders we stood on and the vision for which we organize.

By then Susan Faludi the year before had already published her book, Backlash: The Undeclared War Against American Women.  Even for those of us who had already read Faludi's book, little did we understand how just how bad it could actually get.  Many of the authors in Ruth Barrett's anthology, Female Erasure: What You Need To Know About Gender Politics' War on Women, the Female Sex and Human Rights, alluded in multiple anecdotes to the institutional capture in the Academy of the Women's Studies programs.  These centers for the development and production of feminist knowledge and theory got funding.  But the staff they were allowed to hire were students of the post-modernists and queer theorists, not of the history of actual feminist organizing to end the sexist oppression of women.  Next the bibliographies were scrubbed of the works of Mary Daly and Simone deBeuavoir, Andrea Dworkin and Mary Wollstonecraft and so many others.  Instead young minds were being poisoned with the ideas of the Judith Butlers of the world.  Writing of Butler's work three years ago for the New Republic, Martha C Nussbaum wrote that the "obscurity (of Butler's writing) fills the void left by an absence of a real complexity of thought and argument".  And yet her books have become the center of the syllabus for the mis-education of now close to two generations of students matriculating through the debtor-mills which pass for higher education in this nation.

Commenting on the trial unfolding in the UK Courts, still now as I write this a few days later, Ms. Smith writes in her piece for the Critic:

Allison Bailey is another such woman, challenging the influence of Stonewall to prescribe how women might “name the world” in their own workplace and beyond. Her feminism is not a recent mutation in response to another group’s demand for rights; it’s what feminism has always been.

If, rather than play off one group of women whose words we haven’t read against another whose arguments we misrepresent, we read and listened to women themselves, we would already know this.

Please.  Take the time.  Follow the link.  Its worth your time to read these excerpts in context.