Easy steps you can take now, to make your concerns heard in Texas,
in Congress, in your state Assembly, in the state and federal courts,
even if you are weary of corporate parties playing politics with women's lives,
and especially, if you understand that only women need access to abortions.

It is time we get into the streets and make visible our demands to defend the right to privacy and access to abortion articulated in Roe v Wade.  To learn where folks are gathering in your community, try this link.

We have literature and a banner for you.

Orders received by Monday morning, September 27th, 10 am,
can still be in your hands in time for the October 2nd March.
Please do not delay!

Use these tools to make yourself visible and our demands known to our communities.  Read this page to learn how to get yours today!

For $148.50, the PAC will ship you a banner to make our message visible on October 2nd!  Don't forget to add to your order some union printed literature suitable for distribution.  The materials below are addressed to all the women you know who have been left homeless by the corporate parties who have played political football with the issues vital to the liberation of women.

Can't afford the cost of a banner on your own?  Apply here to carry our banner anyway and we'll provide instructions to help you help us raise the funds to make that possible.

Not ready to carry the banner, but nonetheless want to see it flown proudly next weekend?  Contribute here to help make it possible for us to send these banners to as many October 2d actions as possible.

Want to learn more about the Gender Critical Greens Political Action Committee, the Green Party and a Gender Critical Feminism which centers women and women's concerns?  Subscribe to our lists here.

Act NOW to ensure delivery in time for the October 2nd actions happening across the country, including in a city near you!  We have until 10:00 am Eastern, Monday morning to finalize our order for delivery by Friday, so you are ready on Saturday to be visibly Green and carrying our gender critical message!

The materials below are marked:
'reproduced with volunteer labor'.
To get your union printed
literature delivered to your door,
please order by 10:00 am Eastern,
Monday morning as described above. 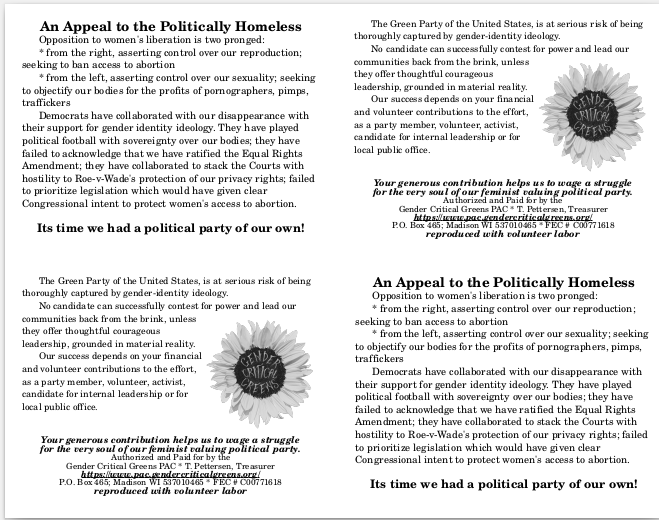 An Appeal to the Politically Homeless

* from the right, asserting control over our reproduction; seeking to ban access to abortion

* from the left, asserting control over our sexuality; seeking to objectify our bodies for the profits of pornographers, pimps, traffickers

Democrats have collaborated with our disappearance with their support for gender identity ideology. They have played political football with sovereignty over our bodies; they have failed to acknowledge that we have ratified the Equal Rights Amendment; they have collaborated to stack the Courts with hostility to Roe­v­Wade's protection of our privacy rights; failed to prioritize legislation which would have given clear Congressional intent to protect women's access to abortion.

Its time we had a political party of our own!

The Green Party of the United States, is at serious risk of being thoroughly captured by gender­ identity ideology.

No candidate can successfully contest for power and lead our communities back from the brink, unless they offer thoughtful courageous leadership, grounded in material reality. Our success depends on your financial and volunteer contributions to the effort, as a party member, volunteer, activist, candidate for internal leadership or for local public office.

Your generous contribution helps us to wage a struggle
for the very soul of our feminist valuing political party.

The half sheet leaflet -- 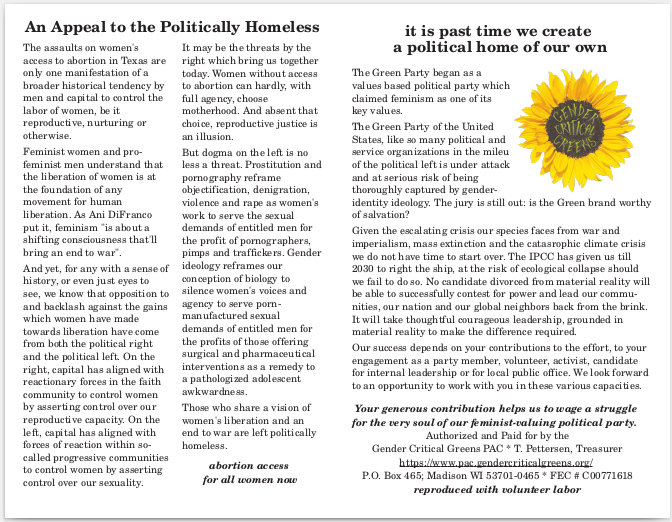 An Appeal to the Politically Homeless

The assaults on women's access to abortion in Texas are only one manifestation of a broader historical tendency by
men and capital to control the labor of women, be it reproductive, nurturing or otherwise.

Feminist women and pro­ feminist men understand that the liberation of women is at the foundation of any movement for human liberation. As Ani DiFranco put it, feminism "is about a shifting consciousness that'll bring an end to war".

And yet, for any with a sense of history, or even just eyes to see, we know that opposition to and backlash against the gains which women have made towards liberation have come from both the political right and the political left. On the right, capital has aligned with reactionary forces in the faith community to control women by asserting control over our reproductive capacity. On the left, capital has aligned with forces of reaction within so­ called progressive communities to control women by asserting control over our sexuality.

It may be the threats by the right which bring us together today. Women without access to abortion can hardly, with full agency, choose motherhood. And absent that choice, reproductive justice is an illusion.

Those who share a vision of women's liberation and an end to war are left politically homeless.

The Green Party began as a values based political party which claimed feminism as one of its key values.

The Green Party of the United States, like so many political and service organizations in the mileu of the political left is under attack and at serious risk of being thoroughly captured by gender­ identity ideology. The jury is still out: is the Green brand worthy of salvation?

Given the escalating crisis our species faces from war and imperialism, mass extinction and the catasrophic climate crisis we do not have time to start over. The IPCC has given us till 2030 to right the ship, at the risk of ecological collapse should we fail to do so. No candidate divorced from material reality will be able to successfully contest for power and lead our commu­nities, our nation and our global neighbors back from the brink. It will take thoughtful courageous leadership, grounded in material reality to make the difference required.

Our success depends on your contributions to the effort, to your engagement as a party member, volunteer, activist, candidate for internal leadership or for local public office. We look forward to an opportunity to work with you in these various capacities.

Your generous contribution helps us to wage a struggle
for the very soul of our feminist­ valuing political party.